The store will not work correctly in the case when cookies are disabled.
FREE SHIPPING when you spend $30 or more 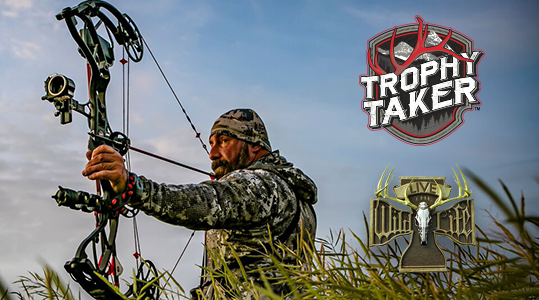 Trophy Taker, maker of archery accessories for hardcore hunters and medal stand contenders, is excited to announce a new partnership with Gus Congemi, host of Live The Wild Life on Pursuit Channel. Congemi is a dedicated bowhunter with seven bow entries in the Boone and Crockett record book, 56 Pope and Young record entries, including the #2 all-time brown bear, and the #1 brown bear in the Safari Club International bow records. In 2017 he was inducted into the prestigious Fred Bear Society of the Pope and Young Club.

Trophy Taker is the fourth brand of Arcus Hunting to work with Congemi, joining Dead Down Wind, Tink’s and Obsession Bows. “Gus has an avid social media following of over 300,000 fans and the content he shares makes him a tremendous representative for our brands,” said Chip Hunnicutt, Director of Marketing for Arcus Hunting. “His hunting style and persona are a natural fit for Trophy Taker.”

“My hunts take me to some of the wildest places on Earth and with Trophy Taker products on my bow, my equipment handles all the conditions I encounter, perfectly,” says Congemi. “I never worry about my Obsession bow or Trophy Taker accessories failing to perform.”

For twenty years Trophy Taker has built a reputation for easy-to-install and silent arrow rests that are tough enough for hardcore hunters, with the reliability that sends competitive archers to the medal stand. Today, the quality and performance of Trophy Taker has expanded to include more vital accessories for today’s performance archer including quivers, stabilizers, broadheads and the new Shrink Fletch for quick and reliable fletching. Learn more about Trophy Taker at trophytaker.com.